MIAMI – A Florida man has been arrested after he allegedly climbed a traffic light on a busy intersection and began sh*tting on cars passing underneath. 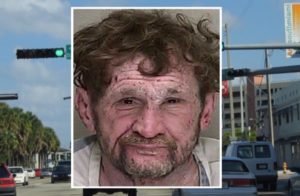 oy Stern was arrested by Miami police after numerous calls about a man hanging from a traffic light and sh*tting on cars. Police and the fire department had to bring Roy down via ladder. According to authorities Roy was high on crystal meth and marijuana.